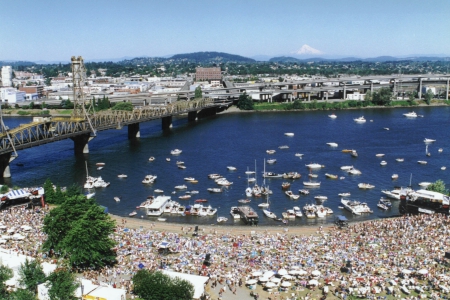 Take a trip to Portland, Oregon and help fight hunger by listening to some of the best blues in the world at the Safeway Waterfront Blues Festival. Get up and dance the night away or kick back and relax on the grassy banks of the beautiful Willamette River and take in amazing performances a long with a spectacular view of the Portland skyline.

The Safeway Waterfront Blues Festival is the largest blues festival on the West Coast and is the second largest in the country. The festival is also Oregon Food Bank’s largest annual fundraiser. The festival not only brings world renowned blues artists to Portland, but is also gives a tremendous boost to the food banks efforts to eliminate hunger.

Past performances have included a number of legendary performers and Grammy award winners such as Buddy Guy, Lucinda Williams and Keb’ Mo’. The Blues Festival is always a great place to discover new talents and become reacquainted with old favorites. The festival is incredibly popular and often sells out, so be sure to buy your passes early.

And, for the most Unique accommodation in the city stay at: